Want to enjoy engaging fun for the whole family? Test your knowledge with these 99 Christmas trivia questions (and answers) for kids of ALL ages! 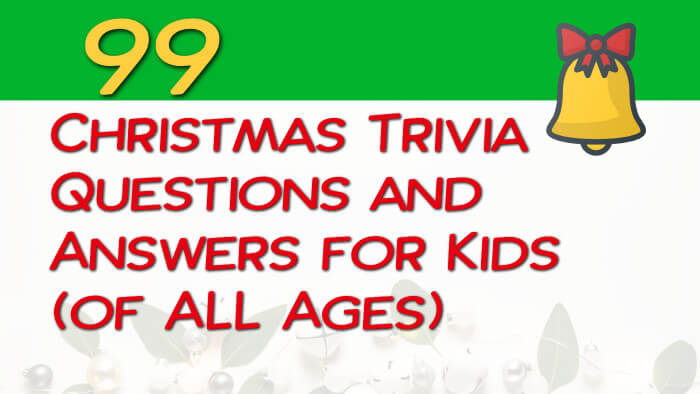 I know that everyone will want to play with their new toys and gadgets on Christmas Day. What will you do at your gatherings before you open presents? How about a fun Christmas trivia game! To keep your family gatherings from getting tense or boring, keep this Christmas quiz handy.

Games and puzzles make any gathering fun. Add a trivia contest to your Christmas games. Not only will it be fun to spend quality time together and test each other’s Christmas knowledge, but there are also excellent lessons to be learned from Christmas history and traditions.

I included questions for all ages so that you can let everyone join in your reindeer games!

For a bonus, wrap a few surprise gifts to hand out to trivia contest winners or to those who tackle tougher questions. Let the kids be Santa’s helpers and hand out the prize gifts.

What better topic of Christmas trivia than the big man himself? These first few questions should be easy enough for younger kids to enjoy.

What color is Santa’s suit?

What does Santa drive to deliver toys on Christmas Eve?

Where does Santa Claus live?

How many reindeer pull Santa’s sleigh (including Rudolph)?

Who are Santa’s little helpers at the North Pole?

Name all of Santa’s reindeer.

Which one of those reindeer shares its name with another famous holiday character?

Why did Santa Claus need Rudolph to lead his sleigh that night?

It was too foggy, and Santa needed Rudolph’s nose to light the way.

How many times does Santa check his list to find to who is naughty and who is nice?

What are two other popular names for Santa Claus?

What do some say that Santa Claus puts in kids’ stockings if they misbehave?

A lump of coal.

While these questions about Santa Claus may be a challenge for the younger kids, they will help include kids of all ages!

Where does the kid see Mommie kissing Santa Claus?

In what country was Saint Nicholas born?

Turkey. At the time, it was called Lycia.

What is the Spanish name for Santa Claus?

What is Santa Claus called in France?

Which real-life person is Santa Claus based on?

To help out with these Christmas movie questions, spend some time watching a few movies together in the hours and days leading up to your holiday gathering. Let everyone know that “this will be on the test.”

In Rudolph the Red-Nosed Reindeer, who joined Rudolph on his adventure after he left the North Pole?

What did the other reindeer not let Rudolph do after they saw his red nose? Hint: “They never let poor Rudolph…”

“Join in any reindeer games.”

What is the name of Rudolph, the Red-Nosed Reindeer’s sleigh team coach?

In the animated movie with the same name, what is the magical train that takes kids to the North Pole?

In A Christmas Carol, what is the first name of Scrooge?

In It’s A Wonderful Life, what happened each time a bell rings?

An angel got its wings.

Who brings Frosty back to life in Frosty the Snowman?

What gift did the drummer in The Little Drummer Boy give the baby Jesus?

He played drums for Him. (Pa rum pum pum pum.)

At the end of A Charlie Brown Christmas, what song does the Peanuts gang sing?

Why can’t Santa make his annual trip in The Year Without Santa Claus?

He caught a cold.

In Elf, what are Buddy’s four main food groups?

What three words best describe the Grinch in the Dr. Seuss classic, How the Grinch Stole Christmas? 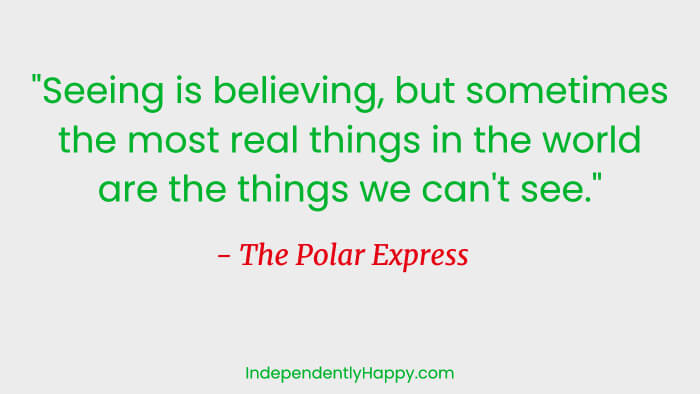 These questions may be more challenging for younger kids. For example, my younger kid has no interest in A Christmas Story. I wouldn’t call her a “younger kid.” And she wouldn’t let me! Including some of these older classics suits these questions better for us older kids.

What is the real-life department store featured in Miracle on 34th Street?

What does Lucy want for Christmas in A Charlie Brown Christmas?

Where was Kevin’s family going for a Christmas vacation in Home Alone?

What was the real name of the character Tim Allen plays in The Santa Clause?

What is the famous reason Ralphie couldn’t have a bb gun in A Christmas Story?

In A Christmas Story, what was the name of the neighbors whose dog ate the Christmas turkey?

Another A Christmas Story question, what does Ralphie’s aunt get him for Christmas?

What is the name of Ralphie’s little brother in A Christmas Story?

In A Muppet Christmas Carol, who played Scrooge? Hint: They are/were not a muppet.

What’s the name of the animated Christmas film in which Tom Hanks voices many of the characters?

In the movie It’s A Wonderful Life, what is the name of George Bailey’s guardian angel?

This section will be a fun time to sing a few Christmas carols before attempting these questions. Even if you’re like me and still don’t know all the lyrics to “The Twelve Days of Christmas,” I think you’ve got this!

In “Jingle Bells,” what ride is so fun?

What is Frosty’s nose made of?

“That old top hat they found.”

According to the famous Christmas song, what would you say if you saw Rudolph’s nose?

“You would even say it glows!”

What kind of pudding do we ask for in the popular Christmas song “We Wish You a Merry Christmas?”

In “The Twelve Days of Christmas” carol, what does my true love give to me on the fifth day of Christmas?

“Cuddly as a cactus.”

Since we hope to wake up to snow on Christmas day, what does the carol say we’re dreaming of?

“I’m dreaming of a white Christmas.”

What kind of Christmas is Elvis Presley going to have?

Although many of these questions may not be common knowledge, they’re still interesting tidbits about a few of the songs we grew up singing.

How many total gifts are given in “The Twelve Days of Christmas” song?

What favorite Christmas carol was originally written as a Thanksgiving song?

What was the first Christmas carol broadcast on the radio?

What is the best-selling Christmas carol of all time?

Which Christmas carol is the most-recorded Christmas song of all time?

Which Christmas carol is considered a lullaby?

How old was Brenda Lee when she recorded “Rockin’ Around the Christmas Tree?”

How long did Mariah Carey’s “All I Want for Christmas is You” take to hit number 1 on Billboard’s Hot 100?

How well do you know Christmas traditions? I encourage you to add a few questions of your own to reminisce about your unique family traditions. For example, why do we leave gummy worms for Santa? Find out in the questions below.

What are the traditional colors for Christmas?

What food do you leave out for Santa on Christmas Eve?

Cookies! (After reading “A Rugrats Night Before Christmas,” my daughter wanted to leave gummy worms for Santa.)

What food do you leave out for Santa’s reindeer on Christmas Eve?

What do most people put on the top of a Christmas tree?

A star or an angel.

Standing under what type of plant during Christmas time means that we’re supposed to kiss?

In what country did our tradition of putting up Christmas trees for Christmas originate?

What is the main course for a traditional Christmas dinner in the United States?

Turkey and dressing or stuffing.

What is the name of the Christmas-themed ballet presented every year at Christmastime?

There’s a lot of history in these questions (as well as a little food). I encourage you to search these topics online for the complete story. Many of them are fascinating!

What are the 12 Days of Christmas?

It is the days between the birth of baby Jesus and the three wise men arriving to visit Him.

What is the 12th Day of Christmas called?

The Epiphany or Three Kings Day.

What is the Latin meaning of the word Noel?

The French world Noël comes from the Latin word Natalis, which means birthday.

What kind of log should you burn on Christmas Eve for good luck the following year?

Eating what food is a major Christmas tradition in Britain?

What is another name for egg nog?

For extra good luck, in what direction should you stir the mincemeat for your pies?

What Christmas decoration is actually a parasitic plant?

In which fairy tale inspired the first gingerbread houses?

In what city was The Nutcracker first premiered?

What traditional Christmas decoration was originally made from strands of silver?

In the U.S., they are hot dogs wrapped in croissant pastry. In the U.K., they are small sausages wrapped in bacon. (What!) What is the name of this traditional British Christmas dinner dish?

Pigs in a blanket.

Which country is the largest exporter of Christmas trees?

Learn the events and customs that shaped many of our Christmas traditions. Be sure to discuss the history of your unique holiday traditions.

In what city was baby Jesus born?

What guided the three wise men to find the newborn Jesus?

A star. (The Star of Bethlehem.)

What three gifts did the wise men bring?

What city in the United States once banned Christmas?

When and where were the first commercial Christmas cards made?

Who created the first strand of Christmas lights?

What was the first Christmas carol broadcast in space?

What country celebrates its Independence Day on Christmas Eve?

Who created the character and wrote the book “Rudolph the Red-Nosed Reindeer?”

Which was the first state to declare Christmas as an official holiday?

Who was the first President to decorate a Christmas tree in the white house?

Which was the last state to recognize Christmas as an official holiday?

Other Christmas Trivia Questions and Answers

These questions didn’t fit well into the categories above. Still, they are fascinating enough to be included in the trivia contest.

Which popular Christmas gift for kids was created based on a political satire cartoon?

Which saint is celebrated on the 26th December?

How do you say “Merry Christmas” in Spanish?

Who wrote the novel, A Christmas Carol?

What is the origination of the X in X-mas?

X is the Greek letter, Chi. The New Testament was written in Greek, and the Greek word for Christ is Christos. In Greek, it looks like this: Χριστός. In the 1700s, the practice began of abbreviating Christmas using the first letter of Christ’s name in Greek, X. [4]

How do you say “Merry Christmas” in Italian?

Speaking of Buon Natale, how is this delightful Christmas Carol not more popular?


Question: Which are your favorite Christmas trivia questions? 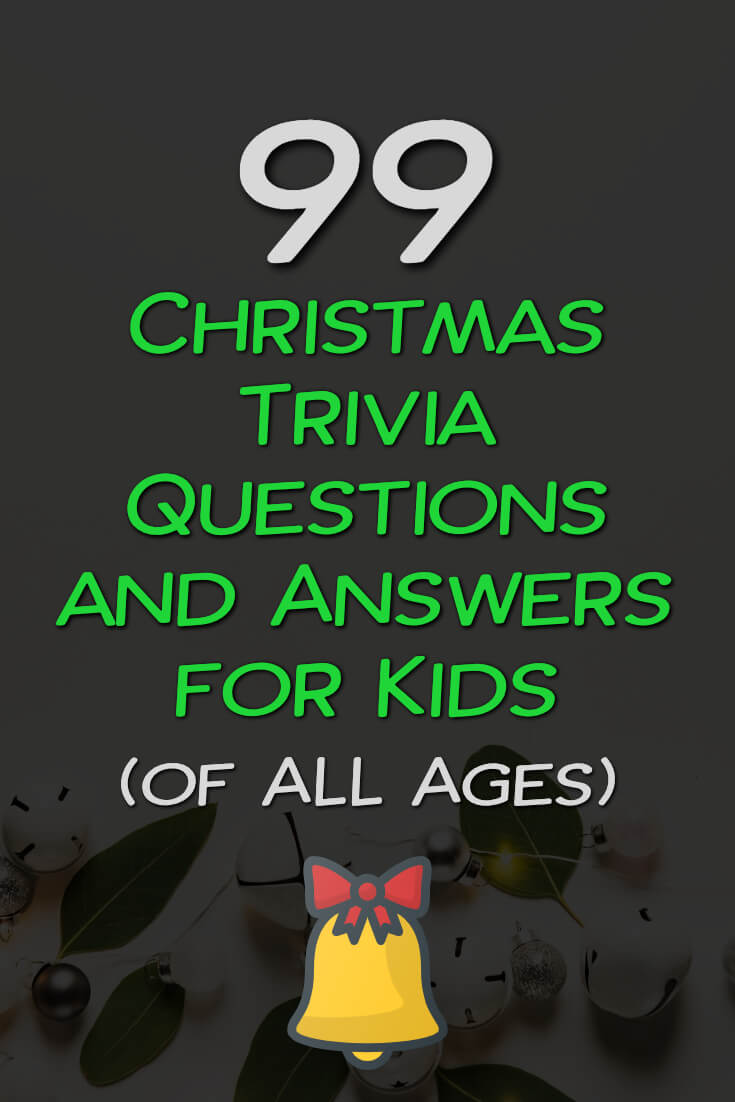