Albert Einstein may or may not have said that compound interest is the eighth wonder of the world, but everyone knows that it is. Take that, Stonehenge! The cumulative effects of small habits compounded consistently over time are enormous. The Compound Effect is very powerful.

is also the title of a book by entrepreneur, motivational speaker and author Darren Hardy. I love the book.

The Compound Effect works in everything, just like it works in interest. When you start eating well, you don’t notice significant effects initially. Over a longer period of consistently eating well, the benefits gradually compound more and more until it seems they can’t be stopped.

Start with the Little Things

When my wife and I were working to pay off our $15,001 credit card balance—something about that 1 bothered me. 15,000 even probably wouldn’t have caught my attention, but 15,001 really seized our attention and got us moving—I bought software to track our finances. I was tracking every penny. I spent most of the time watching the digits to the right of the decimal. A few months in, I glanced slightly left and was pleasantly shocked that there was a comma! The number to its left much larger than I expected!

Six or so months into my season of running regularly, my belt broke. There was nothing visually wrong with it, nothing I could see, but it just stopped holding my pants. I needed a smaller belt.

Several months into running, the compound effect of burning calories was really starting to show!

The same happens with bad habits, such as eating poorly. You don’t gain 5 pounds by eating one donut. 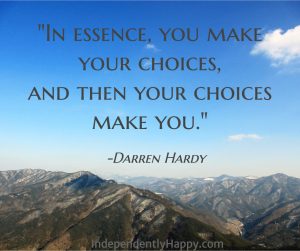 If you eat a donut every day, after a few months, you’ll start to see the compound effect (fat) of the daily donut. It’s as if habits get nature’s attention.

Clearly the Compound Effects of consistent healthy eating and consistent exercise are a very powerful weapon in the fight against obesity…of creeping obesity. It builds a virtuous circle.

On the other hand, the Compound Effects of consistent unhealthy eating and a sedentary lifestyle are a very powerful weapon the Beast uses against you.

Another key point about the Compound Effect is that it builds momentum over time. You may not notice much change initially. It takes at least a few months. Even if you don’t see fantastic results right away, please know that exercise and clean eating are already working. Keep at it. Keep fighting. It will start like a train. It takes a lot of power to move a train, and they start off painfully slow. When they get going though, they are hard to stop.

I bet you’ve known someone who eats well and exercises regularly. They’ll go on vacation for a week. They’ll backslide, eat everything they don’t want, party several nights, come home and will have somehow lost some weight! That’s the momentum of the Compound Effect of months of exercise and eating well. Don’t you want to be them? Eat like they do and exercise like they do.

Conversely, know that the Creepy Food is also working.

If you’re not fighting the Beast, you’re feeding it, one calorie at a time, compounded constantly.

The Compound Effect builds huge momentum from small actions and significantly helps or hinders you reaching your goals.

(TRANSPARENCY ALERT:  Those two links to Amazon or The Compound Effect are totally Affiliate links! Yes, I will hopefully earn an affiliate commission for any purchase you make using links from my site. )

4 thoughts on “The Compound Effect”