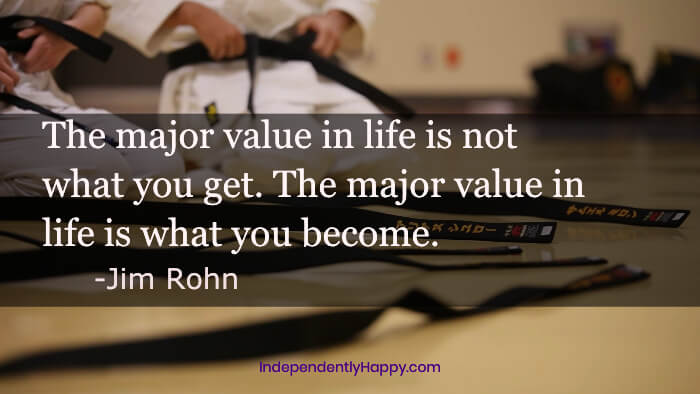 The Path to Getting What You Want

Like so many things I do, this one drives me crazy. Remember when my kid and I were working towards getting our black belts in Taekwondo?

It took us a couple of years. A few months later, I started having some health problems. I was continually getting dizzy, so I took a few months off Taekwondo. We started back in the fall, though, and one year later…

Writing about this right now brings two items to mind. The first is breaking a habit, and the second is getting vs. becoming.

I’ll cover the second item first. I do it because it’s maddening. I’ll cover breaking a habit later. Or maybe not at all. Since I just realized I didn’t cover it when I wrote this last month, and now I don’t remember what I was thinking.

The final night of testing starts around 6:00 pm. After an hour of sparring, it is a mentally and physically grueling five hours of kicking, punching, and all sorts of crazy anaerobic work that takes you way past a point where you want to quit.

That is the Point

They make the test exhausting and painful enough that all you want to do is quit. But you don’t quit. You finish.

And when you finish, you get to spend about an hour cleaning the school.

At 9:00 am the next morning, you meet again to prepare for the exhibition. The exhibition begins around 1:00 pm. It’s two and a half hours of more kicking and sparring to show off for your family and friends before you finally…

Getting is Not as Good

All of this made me especially proud of my daughter, who did this without missing a beat in school or ballet. She was also rehearsing for her first Nutcracker during this time.

It dawned on me during those intense months that we weren’t just getting strips of black cloth, with our names stitched in gold, that we could tie around our wastes to show off how awesome we are.

The years of work weren’t to get black belts; they were to become Black Belts.

It didn’t matter that we haven’t picked up our Kukiwon certificates. That would happen later.

What matters is that we are black belts.

In case you want to know how my daughter and I became black belts. We did it Gradually, then Suddenly.

For help starting or breaking a habit, learn how to do what you don’t want to do.

Since you know you want to know what it was like, check out the story of our Taekwondo Black Belt test on Medium.

What do you want to become? More importantly, why?

2 thoughts on “Getting vs. Becoming”