Did Doctor Strange save the world at the end of his movie? Watching the movie got me thinking. I wondered how the other Infinity Stones might be used to generate a little happiness. That’s when I got my great idea for The Happiness Infinity Gauntlet.

The book is available on Amazon. Enjoy it in paperback, Kindle, and audio!

Click here to purchase it in your favorite format. 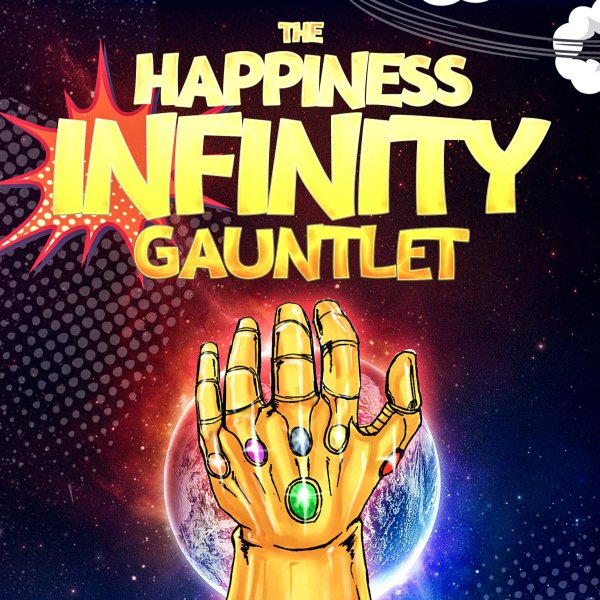 Although there’s no magical time-traveling device (Yet! I’m talking to you, Doc Brown!), I realized that we do have some control over our current and future time and that we have ways to deliberately manipulate our time so that it serves us better. I came up with six ways that we could use time as a superpower if we deliberately manipulated it instead of letting it control us.

The Time gem is just one of the Infinity Gems though.

Could I come up with ways to use each of the six Infinity Gems as a Happiness superpower?

Yes, I can. See what happens when you mess with time!

How about the Space Gem?

In Marvel comics, the person who controls the Space Gem can manipulate the very fabric of space. She can teleport herself or fold space to cross great distances. She can manipulate space and work in multiple places at once. Every mobile solopreneur’s dream!

In “The Avengers,” it’s the cube. Loki used it to travel to Earth. Then he used it to open a portal so that the aliens could come and attack Earth.

After a great deal of thought and practice, I determined five ways we can control our own space to use it as a source of happiness superpower1

The Mind Gem grants its user control over others’ minds. He can read and control anyone’s mind. He can access and control all minds in existence! Without Twiter. I don’t know what that means, but it sounds powerful. It’s the gem in the scepter in the Avengers movies. When Loki tapped the scepter to someone’s heart, he was able to control that person. It gave him control of their mind.

It’s because of the Mind Gem that the great Jeremy Renner had such a limited role in The Avengers.

So far, I’ve got six ways we can use our very own Mind Gem to develop Happiness superpowers.

This one is probably the most important. Most of the stuff we fear, most of the source of our stress and distraction, is all in our minds. It’s not that we have the thoughts. It’s that we focus on them and let them replay over and over in our minds. We replay those negative thoughts like my kid replays the Hamilton soundtrack. Nonstop.

The Happiness Infinity Gauntlet will teach you to use your mind as a source of power instead of a source of fear and stress.

The wielder of the Power Gem can harness “control over all the power that exists, ever existed, or ever will exist.” That sounds like omnipotence. In Guardians of the Galaxy, the Orb that they chase during the movie is the Power Gem.

I currently have seven ways to increase your power with your very own Power Gem. One of those ways appeared in a guest post I wrote for http://www.wetalkhealthy.com/, so you can read now about how to get power in relationships!

We should offer Nicole our sincerest thanks for protecting the Power Gem from Thanos!

Whoever wields the Reality Gem is no longer bound by the laws of physics. She can mold reality any way she sees fit. She can even create alternate realities. Yes, some of these stones’ powers overlap. Whaddaya want? It’s comic book.

In the second Thor movie, that red misty stuff–The Aether–is the Reality Gem. In the movie, it gave the person who had it extra powers, but it also worked as portals between different worlds.

It was a little confusing, but it was a lot awesome!

In the comics, the Soul Stone was sentient. It fed off characters’ souls. It also contained a soul world inside of it where it kept all the souls it consumed. Whoever has the Soul Stone can control the souls of all living things in the universe.

The Soul Gem possesses a danger that the other stones do not. It also causes to the person who carries it to crave souls.

So far, it is the only Infinity Gem to not make its way into a Marvel movie. Unless it was revealed in Thor: Ragnorak this weekend. If that’s the case, please let me know that I really need to update this post!

If it doesn’t show up in Thor: Ragnorak, I wouldn’t be surprised if Marvel (/Disney) decides to just sick with five Infinity Gems. Unless they can come up with a way to make the Soul Gem a little less creepy, they’ll probably want to leave it out of the gauntlet.

I’m not that nice!

The Happiness Infinity Gauntlet will include the Soul Gem and practices to ensure you have a strong and powerful soul. Just as the person who possesses the Soul Gem in the comics has to remain stalwartly in the present and mindful to prevent sharing the gem’s hunger, we must remain mindful of the things in our own real world (and on Twitter) that would drain our souls.

I will teach you that in The Happiness Infinity Gauntlet.

Get Your Paperback, Kindle, or Audio Version on Amazon Now!

That’s Right! Click on over to Amazon and pick up your copy right now!

I’m proud of it and think you’ll love it!

This post contains affiliate links. If you follow the links and make purchases, I will earn a commission. Thank you!