I know some do. Too many people talk about hating their jobs. I see friends posting on Facebook telling of outrageous absurdities that happen at their jobs. We’ve got movies like Office Space, Fight Club, and American Beauty that portray corporate absurdities and nonsense. Yet we also know people who love their jobs. So obviously not all jobs suck.

Does Your Job Suck?

And they work in the same place.

Nobody wants to hear this part, but here it is. It’s what I do.

It’s all about your…

I’ve been there. I used to have an attitude bad enough to make all jobs suck.

I’m saving that for the end. For now…

What Will They Think?

If you don’t care about keeping your job, though, who cares what management thinks?

That’s one of the things about a corporate job. Most people will try to avoid the confrontation, so they’ll agree with you—or you’ll agree with them—and complain about the job.

Whether or not anyone agrees or disagrees, most will participate in the complaining. It’s what everybody else is doing and fitting in is easier than confrontation.

Fitting in is more comfortable than standing out.

Negativity will creep in. It will plant a seed. A weed seed. And we know weeds are sneaky. Then when the complainer isn’t around, the people with good attitudes will complain about the complainer constantly complaining.

You become that person, the one everyone avoids.

Your job sucks, though. You’re not going to be there long, so who cares what the think?

Let’s Just Not Be The Complainer

(I have to admit that I write that with immense hypocrisy.)

Let’s avoid being the complainer. We don’t want to be the one who brings everyone down, even management (they’re people too).

There are plenty of other people to bring everyone down.

We especially don’t want to be the one constantly bringing ourselves down.

There are plenty of other people to do that too.

And That’s the Reason

That complaining might get you fired, and it might get you isolated from the flock in that job you’ll soon leave because it sucks. However, the main reason you shouldn’t be the person complaining all the time is that:

It can feel like complaining is venting, but it’s brewing negativity.

It can feel like complaints are rallying calls and flocking the birds of a feather together, but it’s divisive and you’ll end up the ugly duckling that isn’t a baby swan.

Aren’t we full of foul metaphors?

My kid just finished a “Honk Jr.” production, so yes.

That’s why we don’t want to be the person complaining all the time. 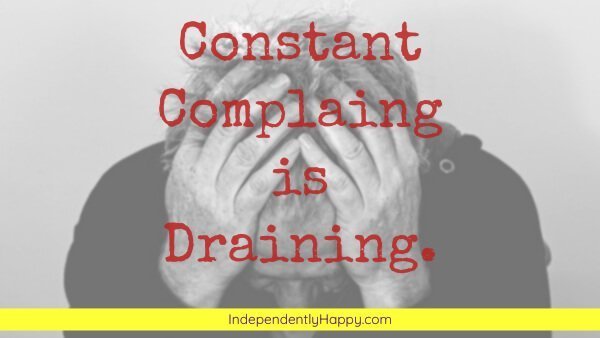 If Your Job Sucks

The first thing you can do is try my 7 Days to Crushing Job Misery email course.

If your job sucks, let it suck. Don’t suck with it. One of the oddest things you’ve written. Don’t waste all your time and energy complaining about it, bringing yourself and everyone else down, planting all those weeds of negativity.

“If your job sucks, don’t suck with it.”

If your job sucks, don’t just live with it.

“If your job sucks, don’t just live with it.”

A vicious circle. I had to type it again for the link.

“What’s worse? The #pain of #change or the pain you’re suffering now?”

Stop the vicious circle and start a virtuous circle by stopping the complaining.

Then do what you have to do to change jobs or careers.

Not All Jobs Suck

Many leaders care about the people and invest in employees as company assets instead of trying to manage, streamline and trim them like expenses.

Find a company that doesn’t suck. Start your own company if you have to.

Maybe It’s Not That Easy

I realize that not everyone thinks it’s easy to find a new job. I’ve heard that for years.

Here are reasons people have given me the past couple years for thinking they can’t find a new job:

Someone has told me each one of those.

I have a friend who right now can’t keep up with calls for positions companies need to fill, and this one person has told me six of those reasons!

I’ve said a few of them myself. I know it seems hard, but get started on it now.

In the meantime, if your corporate job is draining your sanity, energy and purpose, check out my Corporate World Survival email course.

What reasons do you hear for people hating their job?

What reasons do you hear for why people can’t\won’t change jobs?