Can we agree that New Years Resolutions are pretty much a waste of time? By February we’re feeling guilty for not keeping resolutions we didn’t really want to do anyway. If we really wanted to do whatever we’re resolving to do, we’d do it now instead of waiting for next year. Here are the three resolutions that really boosted my happiness. And I didn’t wait for January to start them.

Get it? Resolution. Yep. Great image by J95 on pixabay.com

It’s Resolution Season, that time of year when we all start thinking about New Year’s Resolutions. I decided long ago to stop making NYRs, deciding instead that it was better to start or try something new immediately rather than waiting. I did publish goals for a year back 2009, check out New Years Revolutions.

Since New Year’s Day is next week, now just happens to be a good time for New Years Resolutions, especially if you decide to start a week early.

Since I brought it up, and since bringing things up usually leads me on tangents such as this, let’s discuss the difference between a goal and a resolution, a distinction I did not realize when I wrote New Years Revolutions.

According to Google, a resolution is “a firm decision to do or not to do something.” I had not noticed before Googling resolution that it derived from the word resolve, which reminds me of this Foo Fighters song. I hope you find this diverting.

Enjoy the song as you read along.

A goal should be specific than a resolution. Google defines a goal as “the object of a person’s ambition or effort; an aim or desired result.” If you’d like helpful info on SMART goals, check out Michael Hyatt’s Beginner’s Guide to Goal Setting.

In my opinion, developing resolve and making progress on our resolutions helps us towards achieving our goals. I also believe that reaching goals helps strengthen our resolve. So be sure and break your goals down into smaller goals that you can achieve quickly and easily.

You didn’t click a link to a blog about goals, though, did you? That’s what the rest of the Internet writes about. Let’s talk about the three resolutions that have really helped me since I resolved to practice them:

Regardless of what we get, the newness wears away. Over time, regardless of how much we wanted something, the satisfaction slowly fades. We become used to having it, and we want to get to something else.

Conversely, giving doubles the satisfaction. We feel good for giving, and seeing how good it makes the other person feel doubles the goodness. It makes us want to give something else. We have to have something to give it, so we find creative ways to get those things.

Trying to Attain or Obtain Something for Others

I never thought of that, so I’m so glad you asked. Seriously it’s going to be good for an extra 100 words and an excellent point, so I’m thrilled you asked!

That may apply the first time. When we give, though, it feels great. When we see the reaction from the people to whom we give and see how it makes them feel, we grow to appreciate giving over getting.

Interestingly enough, people will want to give us stuff too! People giving us stuff feels so much nicer than getting stuff for ourselves. We feel quadruple great because we gave and someone gave to us, and they fee double great because they gave and saw how much we loved it.

Resolve to Never Again be Jealous of Anything Anyone Else Has.

Good jealousy is the jealousy I have of my friend Darren when he’s working on an Extreme Lightscapes Christmas display in Limon, Peru. I’m super-jealous of him! I’m jealous that he gets to do the work he does and that he gets to go travel the country and world to do it.

I’m also super-happy for him! I’m thrilled for him that he gets to do that. He worked so hard for so long, struggling so much, that he truly deserves what he gets to enjoy.

Being happy for, rather than jealous of, those who are successful makes me feel good. It makes me feel grateful and hopeful. Gratitude for others’ success is still gratitude.


Plus I’m thankful that he is successful doing what he does and proving that it is possible to live a wonderful life making an awesome living doing something you love.

“Gratitude for others’ success is still gratitude.” 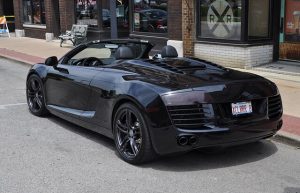 Awesome photo was taken by jcchurch1977 at Pixabay.com.

Bad jealousy will not do a single, good thing for anyone.

Bad jealousy would also be me thinking they he has to give me some of what he’s earned to be fair.

Jealousy and concern for what is fair or unfair often go hand in hand.

I’ve grown pretty immune to bad jealousy now. I can’t actually recall being jealous anytime recently.  I enjoy that because bad jealousy feels bad. It feels dark, dirty and hopeless, from what I can remember.

If you want to work on good jealousy, by all means, do so.

However, we should work to avoid jealousy completely.

“Resolve to never again be jealous of anything anyone else has.”

This one is tough. It is so tempting to put the blame on someone else for our lot in life. I didn’t fail life; life failed me.

Blaming someone else, even if it could be argued that the situation is their fault, does us no good. It gives someone else the power. It renders us helpless to our own well-being. Pardon my Frances, but that would just suck. 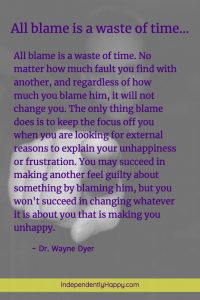 Dr. Wayne Dyer summed it up with “All blame is a waste of time.”

It’s heavy, but it’s liberating. Something being heavy and liberating might be difficult to accept.

Have you ever tried to lift a helicopter?

Learn to embrace that control.

“Many can influence my destiny, but I control it.”

“Resolve to never again blame anyone else for anything you don’t have.”

I recommend this lovely, printable reminder to display on your refrigerator or work area.

←7 Certain Ways to Hate Your Job
Discounts and Distractions →