Do you ever feel like Matthew McConaughey and Anne Hathaway in Interstellar? You think you’ve just dropped on and off Miller’s planet for a few minutes and realize you were gone 23 years? When you’re drifting through life and not paying attention, time flies so fast.

Not only does time fly, but it seems to be picking up speed!

That brings up two questions.

I propose that we can slow down time.

Just a Few Minutes on Miller’s Planet, aka YouTube

Have you ever clicked on what looked like an interesting video link in YouTube? You click the link and the video starts. Since you’re busy and your day is full you check the length of the video. It’s only six minutes. You can spare six minutes, so you click play and change the playback speed to 1.25.

Then you click another video. And another. The next thing you know you look up and it’s 2:00 am.

What happened to the time? How did six minutes turn into three hours?

“You are young and life is long and there is time to kill today.
And then one day you find 10 years have got behind you.”

You Have to Know How Long Your Legs Are

While looking back through my list of blog post drafts, I noticed one that caught my eye. You have to know how long your legs are.

It seems like a few months ago that our Taekwondo instructor said that to us, but the file is older than that.

Somehow, two years and five months have passed since he said that. Crazier still is that I wrote those first few sentences of this paragraph eleven months ago. 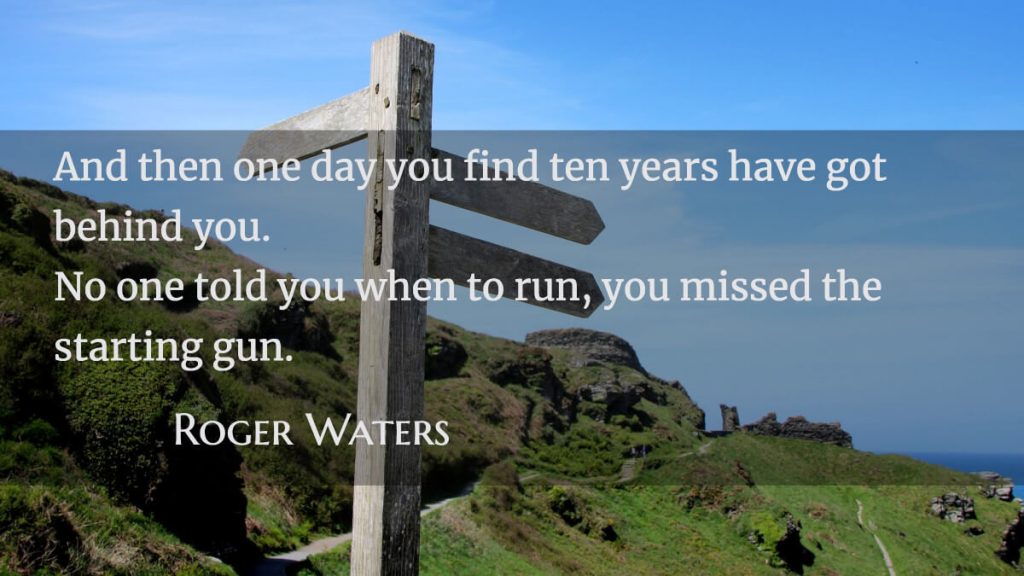 When Master Franks said, “you have to know how long your legs are,” he was talking about spacing when throwing kicks. Based on the length of your leg, we usually need to hop a little toward or away from the target so that the kick’s contact makes the most impact. That takes some self-awareness, knowing how long your legs are and how close you are to the target.

We also need to know how much time we spend on what we’re doing, so it makes the most impact.

“Burning seconds into minutes
on my way to seize the day.
Stolen moments as a lifetime
Seems to fly away.”

Also, check out Time is Better Than Money.

Is Time Really Speeding Up?

Let’s review a few reasons why time flies so fast, or why it seems to pass faster as we get older.

Time Perception is a Percentage of Life

“The apparent length of an interval at a given epoch of a man’s life is proportional to the total length of the life itself. A child of 10 feels a year as 1/10 of his whole life – a man of 50 as 1/50, the whole life meanwhile apparently preserving a constant length.”

0.02 is significantly smaller than 0.1, so a year to me passes that much more quickly than a year to my kid.

After I spent an hour trying to comprehend that theory, I felt like Jack White in the White Stripes song The Hardest Button to Button.

“I had opinions that didn’t matter.
I had a mind that felt like pancake batter.”

That theory blew my mind more than Interstellar. No disrespect to Mr. James, but I also think it’s nonsense. Gobbledygoop. Spell correct is trying to tell me it’s gobbledygook, but I really think it’s goop.

For a visual of how his works go to Maximilian Kiener’s Why Time Flies project and scroll down to see how the perceived passage of times speeds up as we age.

Time Speeds Up as the Brain Slows Down

Bob Holmes wrote an article for New Scientist about a study in which individuals of varying ages estimate the passage of three minutes. According to the study, elderly and young people do perceive time differently.

The psychologist conducting the experiment hypothesized that the perception differences could be the result of deterioration in the parts of the brain that manage our internal clock, the basal ganglia and the substantia nigra. As those parts of our brains slow down in their production of dopamine, time seems to speed up by comparison.

Stick with me here.

Don’t go nodding off or clicking the back button cos I’m using all these fancy scientifical words. I’m about to throw down some mind-blowing hypothicantations of my own!

Read on. Time flies when you’re having fun!

Can Exercise to Speed up Your Brain and Slow Down Time?

If this theory is correct, then maybe we can slow down time’s perceived speed by speeding up our basal ganglia and substantia nigra.

This Psychology Today post by Ronald E. Riggo Ph.D., he suggests that repetition may make time seem to pass faster. Likewise “novel experiences,” trying new things, may seem to slow down our perception of time.

Dr. Riggio summed up the article with:

“Routine makes time go faster, unique and memorable events slow down time. Although there is comfort in routine, it does make time fly.”

Keep your habits and routine, but spice them up. If you run, run in different places. Increase and decrease your pace or distances. If you lift weights, mix up your exercises. Take a different route occasionally for your commute. If you write every day, try some new topics. If you write non-fiction try some fiction.

It’s just like Gretchen Rubin says, “The days are long, but the years are short.”

I was shocked by how much time had passed since my Taekwondo instructor said that, but that’s Time. It goes fast. It goes so fast, and then it is gone.

If there is something you are thinking about doing, do it now.

Check out: Do That Thing That You Want to Do Now
and
Pink Floyd’s Time is the Wisest Song Ever!

If there is someone you are thinking about seeing, see them now.

Make sure time flies for you, not against you.

These aren’t just activities to pass the time. These are experiences to live. They’re things to relish later or stuff people will pay you to teach them later, stuff to pass on to your kids. Don’t pass the time. Live it.

All those things we postpone and procrastinate are things we put in a trunk we can rummage through later. That trunk is called Regret. No matter how you tried to hide regret in a closet or under pretty blankets, it will always be really hard to not see.

We can wait, or we can act.

We can take pictures and buy souvenirs of what we do and put them in a photo album called Life.

You Might have got a little dramatic on that last bit.

The feeling of not having time left to do the things we want to do are what makes it seem like time flies so fast.

Speaking of starting. If you haven’t started filing your taxes….now would be a good time. When you haven’t finished your taxes, time flies in April. Then, start what you’re meant to do.

“I let my past go too fast
No time to pause
If I could slow it all down
Like some captain
Whose ship runs aground
I can wait until the tide comes around.

Can You Slow Down Time?

This Journal of Neurology & Neuromedicine article states that exercise boosts the basal ganglia in addition to most other parts of the brain. We know exercise helps us stay young. Might it also slow down time for us?

This manuscript on National Center for Biotechnology Information states how exercise benefits Parkinson’s disease patients because exercise helps boost dopamine (and other stuff) which helps patients with motor disabilities.

More dopamine could mean a more stable internal clock, which could result in our perceiving time to pass more slowly.

Every article I researched on boosting the basal ganglia and the substantia nigra touched on how exercise helps patients with motor disabilities such as Parkinson’s.

Mix it Up a Bit

Keep up your habits. Habits are what help us grow and improve. Habits get nature’s attention. The compound effect of habits practiced consistently will eventually lead to significant progress. Just mix it up a bit. Add some variety to spice up your life, challenge and exercise your brain and slow time.

Making learning a habit will give you the variety you need to make life (and thus, time) less monotonous while also helping you enjoy the compound effect of a consistently practiced habit.

Travel to new places. You don’t have to fly to Europe. Drive to a small town in your own stage. Try new restaurants or new cuisines. Go listen to local live music.

Live in The Moment

The more you can live in each moment the happier you will be. That means remaining mindful and present. Mindless repetition of tasks not only leads to a mundane life void presence and happiness but also increase the perceived speed time’s passing.

Exercise can help you stay young physically by flushing toxins and boosting brain functions as well as slow down the perceived speed of time. Imagine feeling younger and time slowing down. Not just living a longer life, but enjoying each moment of that long life.

Time isn’t really moving faster or slower. It just feels that way. We just perceive it that way.

But Time Flies When You’re Having Fun

If we know that time flies when you’re having fun, how will more fun slow down time?

Getting Through an Unpleasant Time

When you hate school or hate your job and you want the day to end so you can go home, how are you spending that time?

You want the current time to pass to get to a more pleasant time.

Getting Through a Pleasant Time

When you’re having fun and time seems to fly, how are you spending that time?

You’re in the moment.

That is two completely different perceptions. That is comparing the time remaining versus the time that has passed. When we concern ourselves with the rapid passage of time, we’re talking about that time that has already passed.

Looking Forward to the End

Let’s say you’re wanting a work day to pass quickly so you divert yourself by watching Netflix to pass the time more quickly. You have big plans this evening! If nothing else, leaving that crappy job for the night. You’ll be absorbed in the show and notice less the passage of time until the workday ends.

You could also try these simple ways to seize the day in a job you hate.

“Deadline after deadline, goal after goal, time races by, especially when we are busy.”

If you work on a task or project to pass that same time, it won’t be as pleasant as Netflix. The same amount of time will pass, though. Then, since you have less work unfinished, you’ll feel like you have more time to finish what you want to do.

It’s not about fun. It’s finishing what you want or need to finish.

If you exercised, mix in some variety and live in the moment to speed up your brain and slow down the apparent speed of time along with completing the things you want to complete to make yourself feel like you have more time left, time will feel like it slows down.

What are some things that you want to do but don’t feel like you have enough time?

2 thoughts on “Time Flies So Fast! How We Can Slow it Down”